The Flaw in the Crystal (1954) by Godfrey Smith 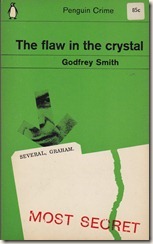 God knows why this was published in Penguin's green crime series. The book does deal with espionage, but at such remove that the fact only becomes clear in the last 60 pages or so. The protagonist, Roger Meredith, works at a nameless government office and is asked by his superiors to befriend an exceptionally gifted and remarkable man called Graham Several, and evaluate his soundness and reliability. It is not made clear until very late in the book that Several is considered for a dangerous mission behind the Iron Curtain. Precisely nothing of note happens as Meredith is wined and dined by Several, visits his haunts, establishes relationships with his friends and generally muddles on with his assignment without revealing much insight into character or any particularly interesting aspects of his own personality. The premise has potential - the very understatedness of the problem is intriguing: what is it exactly that makes a man 'sound' or otherwise? Little is suggested by way of an answer, and less action takes place by the time when at the very end a simple but effective twist looms: Several had been vetted long ago - can it be that Meredith is the one under the microscope? Alas, this is discarded in favour of another development. It is a not unworthwhile book, mainly because it is rather different from what one expects of this genre and period, and it’s decently written, but mostly less than compelling and ultimately unsatisfying.

It is reviewed more favourably here.

Ha.
Sounds strangely like U.S. -
a flaw-in-the-crystal.
...but never with MrT.
GBY