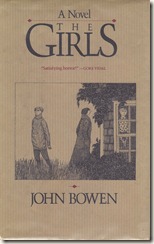 Jan and Sue live together outside a small English village where they keep a shop. They are lovers; Jan is the older by 10 years and thus something of a mother figure to Sue. After seven years of this quiet Lesbian domesticity, Sue is unsure whether her life is on the right track. She goes to Crete for a holiday to ‘find herself’, leaving Jan unhappy and lonely. Jan goes to an Inland Waterways meeting (this is 1975, and Robert Aickman may well be around) and meets Alan who is younger but just as lonely. They have a one night stand which is pretty much a fiasco as far as Alan’s skills are concerned, but it is enough to leave Jan pregnant. Sue returns tearfully home more than ever needing Jan’s care. When Jan gives birth to Butch, they plan to bring him up together in blissful harmony. But then Alan turns up, and from here things take a sticky turn.

The book is neither a mystery nor a thriller, so it won’t be a spoiler (especially given that no one’s ever going to read it) to say that it turns out to be a paraphrase and/or inversion of… Hitchcock’s Psycho, of all things. The parallels are hidden so skillfully that it’s only towards the very end, after an explicit reference, that this becomes clear. Unfortunately, it reads like a Ruth Rendell thriller written by Hope Mirrlees: almost like a fantasy from a never-never land. It’s an interesting approach which possibly could be made to work, but somehow didn’t. The writing often gets too precious, while uncomfortable or horrific details are stated matter-of-factly in a jarring counterpoint; the effect is artificial and tiresome. Yet this language is obviously a conscious choice, so at least the author knew what he was doing. The experiment might have been more successful in less mannered prose.

But then there is one further twist, of sorts, on the very last page of the book, which shakes up the picture and introduces an unexpected angle. They are a haunting couple of paragraphs, and though I read the book mostly longing for it to be over, its bittersweet aftertaste will linger in memory. It’s like there was another, completely different book in there, which the author elected not to write; a reference to a gap on a library shelf.