The Sabre Squadron (1966) by Simon Raven 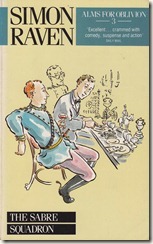 In the third volume of Alms for Oblivion Simon Raven does something rather unexpected. Events take place in 1952 in a quiet West German town of Göttingen where a young Cambridge mathematician, Daniel Mond, is trying to decipher the papers of a German colleague who died in the 1930s while working on something which may or may not have been a revolutionary new mathematical method. Mond is obsessed with (or tormented by) his Jewishness in a country which has not yet come to terms with murdering six million Jews. Lonely and depressed, he makes friends with some Dragoon officers from a nearby British base, among whom is Raven's alter ego Fielding Gray, last seen volunteering into the Army at the end of the eponymous novel, and the equivocal figure of Giles Glastonbury who played a major if mostly backstage part in the events of the previous book in the series.

Somewhat despite its straightforward title, and unlike any other British Army novel that I know, The Sabre Squadron gives an outsider's view of soldiers and soldiering, as in an outlandish turn of events Daniel is forced to assume the role of a private under the short-tempered command of his friend Gray. Then little by little the book turns into a spy story, acquiring along the way some of the ambiguities if not the deviousness of an Anthony Price plot. The ending is a bolt out of the blue, yet essentially simple and fully logical, so more satisfying than the contrived scheming at the end of Sound the Retreat (the second book in the sequence but written five years after the third). It is also rather abrupt, so one hopes to come across some development or reflection on it in further books - and, knowing Raven, this might cast the events in a totally different light. In fact, this is one of the most interesting aspects of Raven's sequence: not having a single narrator (like Powell's Nick Jenkins), it can present its characters ambiguously, as capable of both honourable and dishonourable behaviour, depending on the network of relationships within which that behaviour is enacted. Incidentally, honour is a hugely important concept in Raven - which is most likely why he became so unfashionable towards the end of his life. His famous cynicism was largely misunderstood and probably exaggerated, not without some help from the author himself. The fact that honour in his world was a fluid notion never reflected his rejection of it, but only the complexity of his outlook. It seems to be generally agreed among reviewers that The Sabre Squadron is a weaker link in the Oblivion chain. I would say, instead, that it is a key to Raven the moralist - a quality which is not usually noted by his fans. It is commonplace to consider Raven amoral, but a good amoral writer by necessity reflects the opposite quality, and usually to more significant effect than someone who merely sets out to uphold the traditional viewpoint.

Email ThisBlogThis!Share to TwitterShare to FacebookShare to Pinterest
Labels: raven