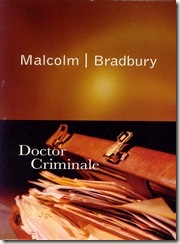 Soon after the collapse of the Wall, a young journalist travels across Europe researching the life and work of a famous but elusive Eastern European philosopher.

'Old-fashioned' is a word that comes to mind often when reading this book, and indeed I think a LibraryThing reviewer uses it in his first sentence. What exactly gives it the old-fashioned feel is very interesting: I believe it's the fact that the author does not try to be clever about his subject - even when at his funniest or most ironic - and that he remains straightforward about it all the time, not aiming to disguise his not being clever. In other words, the book is as simple - perhaps naïve - as its narrator is meant to be, without winking to itself postmodernistically all the time. The narrator is slightly problematic: his voice, in its simplicity, is quite a bit older than his apparent age, and his big introductory scene, hilarious, at the Booker Prize ceremony, sets him up as a sort of enfant terrible which he certainly is anything but for the rest of the book (one almost expects the whole thing to disintegrate into a Holden Caulfieldish drivel after the first chapter). But there is something endearing about this mismatch of personality and narrative voice: the book comes from a time when a young man could afford to have a serious voice, at least about some things. Aside from that, it destroys any possibility of a realistic approach, quite in line with the novel's treatment of Europe as a fictional, transitional never-never land.

The novel's philosophic insights may not be profound, but they are not insignificant. Bradbury is a rare author who can be funny without losing sight of serious things. It's not quite effortless - one can see the construction elements all the time (and this is curiously in common with Bradbury's two famous students, McEwan and Ishiguro, who also seem to share some rhythmic similarities with him). But Bradbury's general likeability overcomes this (as it sometimes does not with Ishiguro and never does with McEwan). It reads a bit like a cross between Iris Murdoch and David Lodge, with perhaps a dash of the 'magical realism' that is explicitly referenced in the book when the narrator goes to a cultural conference in Argentina, re-reading the major 'magical realists' on the plane and then stepping into the literary community of Buenos Aires where everybody talks about Borges and every woman is a former mistress of his. I use quotation marks because I detest the term and much of what goes under it, but the technique works well for Bradbury who uses it sparingly, wittily and firmly within the European tradition. 'Magical realism' gets to be too much when it's smothered by exotic local colour (and flowery language), but Europe seems just the right setting for it. The fact that scores of actual and living public figures are mentioned and encountered in the pages of the book somehow only adds to the fictional haze enveloping the continent which Bradbury makes a character in his book. His non-judgemental, ironic, but also rather sober view of Europe as a network of corruption (in which East and West are symbiotic partners) may have been taken as jaundiced poetic license in 1992, but is mild stuff by today's standards. Yet when one considers the atmosphere of international jubilation in which the book was written, it must have taken quite a bit of clearheadedness to be so bleak about the underlying fabric of history.

Criminale, the brilliant intellectual allowed to travel freely between the East and the West during the Cold War years, betraying a little bit of each side to the other, must have had quite a few real life models. Yevtushenko comes insistently to mind - not that he could be called an intellectual - because so fêted in the West while at the same time so obviously an informer - also because, like Criminale, he managed to convert his public fame rather mysteriously into a very comfortable retirement package in the healthy climes. George Steiner and Georgy Lucacs must have also contributed to the character, both explicitly mentioned. What puzzles me is why Bradbury chose this name for his antihero, with all its blunt connotations.

Another and more general complaint is Bradbury's old habit - affectation? - of squeezing his conversations into long single paragraphs, so that it's sometimes a headache to keep track of who's saying what, especially if more than two persons are participating.

Among the curiosities that struck me on a personal level: the book has an epigraph from Freud, and as early as page 4 seems to get weirdly prescient about this reader's historical background:

There was budget crisis in Washington, high-street recession in Britain, the fiscal jitters in Tokyo, and bank fraud all over the place. In Brussels Napoleonic dreamers were reinventing Europe, if they could just find out where its edges started and stopped. There was conflict in Yugoslavia, ethnic and tribal tension everywhere. Over the European fringes, Saddam Hussein (former Takriti street-fighter, and BBC World Service man of the year), thinking it was passing brave to be a king and ride in triumph through Persepolis, had sent a genocidal army to murder, rape and pillage in nearby friendly Kuwait.

Etc, etc. Insert other names, reverse the roles here and there, and does anything ever change?
Posted by polecat at 7:40 pm