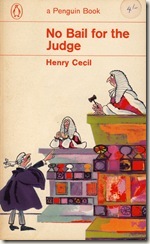 A prudish High Court judge criticises a colleague for an indiscretion, and explains how he himself, once appointed to the High Court, stopped even going to a pub for lunch to avoid the slightest possibility of doubt as to his moral character. The very same evening a combination of circumstances forces him to accept the hospitality of a prostitute. Five days later he finds her murdered and himself holding the murder weapon. This is a classic Hitchcock situation of the wrong man framed for murder and an innocent man being punished for tempting Fate with thoughtless words or actions. The story also develops in the typical Hitchcock fashion, with the mystery element discarded early on and the suspense tightened by the uncertainty of how, or if, the truth is going to triumph in the end. No wonder, then, that Hitchcock was planning to film this novel in the late 50s, with John Williams as the judge, Audrey Hepburn as his daughter and Laurence Harvey as the gentleman thief she hires to prove her father's innocence. The project is famous for its attempted rape scene involving Hepburn, which is not in the novel but which, one hardly doubts, Hitch would have made the centrepiece of the film. The whole thing would have been a curious reversal of the situation in Dial M for Murder, where John Williams comes to the rescue of Grace Kelly, falsely convicted of murder. One can't help regretting this was never filmed.

Cecil's books (I've read two so far) are popular entertainments with some simple lessons to teach about the principles of law and the legal justice system. The way their plots and narratives are put together may seem almost perfunctory: the author avoids anything like character development and following a coherent train of events to drive the story forward. What he goes for are long stretches of quirky or sometimes hilarious dialogue and brief, virtually inconsequential episodes of character interactions which seem like vignettes very obliquely related - or even totally unrelated - to the main story. Here's an example with a minor character picking up a prostitute:

Both such episodes and the dialogues sometimes manage to create for a moment a sense of atmosphere or character that seems almost an incidental by-product of the narrative. This approach may create the impression that the author does not really care about what he's doing (and certainly not about literary art). However, on consideration, the episodic and seemingly inconsequential structure of the story must be very similar to the way that a trial judge pieces together the strands of the often disjointed evidence in a legal case, reconstructing the events and the patrticipants' characters from a limited and tendentiously arranged amount of factual data. And Henry Cecil, of course, was himself a County Court judge, so it wouldn't be too much of a stretch to suggest that perhaps the curious way he constructed his narratives was related to what might be termed his legalistic worldview. And this would mean that such constructions are not arbitrary but, on the contrary, rather original. Be that as it may, I find his stories intensely readable, and the sense of a higher moral order they imply is a comfort and an encouragement, even if it highlights a conspicuous absence of same in the world around us.
Posted by polecat at 8:20 pm

This is one of those books that I've been meaning to read for literally decades ever since reading about Hitchcock's failed attempt to get it off the ground in Spoto's biography of the great director.

I'm just getting acquainted with your blog but congrats are definitely in order - you are covering some fascinating material here - thanks.

Thank you Sergio. I also enjoy your blog and have marked down a few titles for a future purchase. I am sure that my reading list can hold few surprises for you, though (at least on the murder and mayhem front)!