A High-Pitched Buzz (1956) by Roger Longrigg 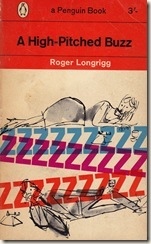 A curious little novel, one of those which fall between the cracks of literature and never get rediscovered. It chronicles a few days from the life of a young copywriter who reads Raymond Chandler and goes to see samurai movies in between his social engagements. The thin plot has a lot to do with life's little treacheries, and can be seen, if one wants to look at it that way, as an extension of Chandler's big theme: what is an honourable man to do in a dishonourable world? It is interesting how the same kinds of treachery are treated as a big tragic subject in the early 20th century - say, by Henry James or Ford Madox Ford, - and how by the 50s they become the everyday form, as illustrated in this book or in something by Pamela Hansford Johnson or Roy Fuller. The account of the office intrigue directed at unseating the protagonist's obnoxious boss could be written today - or perhaps indeed at any point of time as long as offices exist. Today, however, this sort of thing is taken for granted. It was only for a brief period that such things were at all considered by literature - precisely that kind of literature that got sidelined later as irrelevant. Perhaps the authors themselves were only semi-conscious of this commonplace villainy as symptomatic of something bigger and deeper and going wrong with the human nature. But this is not to suggest that this particular book tries to be very serious. However, when Henry, the protagonist, goes to visit his fallen boss at home, we discover something very different about the man from what could be expected. The style is perhaps a conscious borrowing from Evelyn Waugh - with pages and pages of absurdist but lifelike dialogue - but whereas in Waugh everybody was either ridiculous or Catholic, here the effect, or the outcome, is rather less straightforward. Ultimately, the protagonist is more puzzled than anything else - by the way people act, by the way things turn out, and even, to an extent, by his own motives. That puzzlement is perhaps the most valuable thing about this flimsy, easily likeable novel. Among the incidental pleasures are some turns of phrase which could be pure Chandler, or sometimes the definitely British vintage of the chandleresque idiom: Askew like an evil Brazil-nut behind his big shiny desk; or Leaning forward with a pathetic air of eager bafflement, like an English child at a French gangster film; or He grinned at me charmingly from the fireplace, up the side of which he was growing like a vine.
Posted by polecat at 10:08 pm